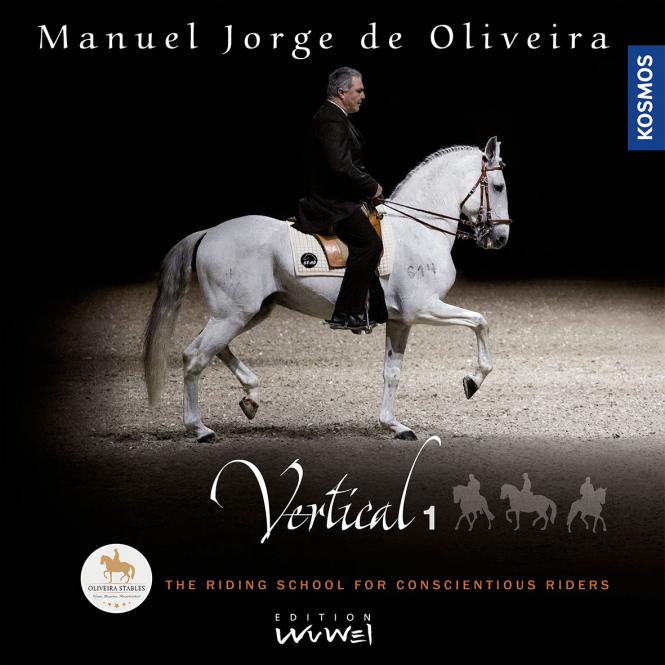 Book: Vertical 1 - The first year of the ESCOLA de EQUITACO

In 2015, under Manuel Jorge de Oliveira’s watchful eye, the Oliveira Stables in Germany (86875 Waal) was created. It is a place of knowledge, where horses, students and trainees absorb his teaching and later, disseminate it to the wider world.

The first three year training course, for riders of all levels (known as the Escola de Equitacao) started in 2016. This book is the textual Version of the first year of this course. He clearly states his philosophy in this quote: ‘There are only two possibilities to train a horse; the Path of Truth or the Path of Untruths. Everybody who buys or owns a horse, including professional trainers, must decide which of these two paths they wish to take. The Path of Truth creates proud, bright eyed horses ridden on light, invisible aids’.

This book should help every horse owner assess how closely their trainer follows this traditional knowledge, as taught by Oliveira. The professional trainer will either feel confirmed in their current path, or be motivated to undertake further training. Oliveira is totally non-discriminatory as to whom he trains and considers it a privilege to help any rider on the path of balance, regardless of whether they are a professional , hobby , competition rider etc. Sadly, a great deal of Manuel Jorge de Oliveira’s knowledge, which he divulges with such fervour during his lessons isn’t taught, nowadays, anywhere else. And for that very reason this book and the Oliveira Stables have been created, in an attempt to make this knowledge accessible to the wider public. Both are incomparable. The title of the book is Vertical 1: Why? Because the goal for all riding must be vertical balance.